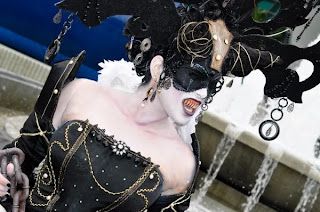 Hello and welcome to my costuming blog. My name is Lorraine Torres and I'm currently best known for my creation of the Mistress of Pain costume featured at Blizzcon 2009 and 2010. I'll be posting about events, completed projects (with the clients permission), and techniques I have experimented with to create costumes and props.

Currently I'm preparing for Blizzard Entertainment's release of World of Warcraft's next expansion: Cataclysm; which features Goblins and Worgen as the two new playable races and Deathwing - the brand-spankin' new enemy dragon aspect. Partnered with the University of Central Florida Game Stop, I indent to host and awesome game release Monday, December 6th starting 11pm until 3am. Featured at this event will be 4 costumes representing both Horde and Alliance factions and a surprise 5th costume that I'm currently producing specifically for the event.  If you're local, hope to see you there!
Posted by Lorraine Torres Costume Design at 10:02 AM